Humanism in Queensland began in an organised form in 1968 when the Queensland Rationalist Society changed its name to the Humanist Society of Queensland (HSQ). We have been campaigning for over fifty years on a broad range of issues relating to civil and human rights, and the distinct separation of church and state.

Our members have been active in the formation of special interest groups such as Children by Choice and Death with Dignity. To this day humanists work alongside people within these and other similar groups to challenge legislation where religious views influence public policy.

HSQ was also active in the early days of Queensland’s LBGTI rights movement. We were the first community group to campaign for the decriminalisation of homosexuality.

We continue to support issues such as abortion law reform, gender equality, drug law reform, while constantly working toward providing children with a truly secular  public education system in Queensland.

The Federal funding of the National School Chaplaincy Programme (NSCP) which now exceeds over one billion dollars is a serious and ongoing issue, as are the anachronistic provisions within the Queensland Education Act which have been enforcing religious instruction and Bible lessons in Queensland public schools since 1910.

Australian citizens already experience freedom of religion. As is the case with various other secularist organisations, it is our desire to enjoy freedom from religion as well.

Please direct all enquiries to: secretary@hsq.org.au 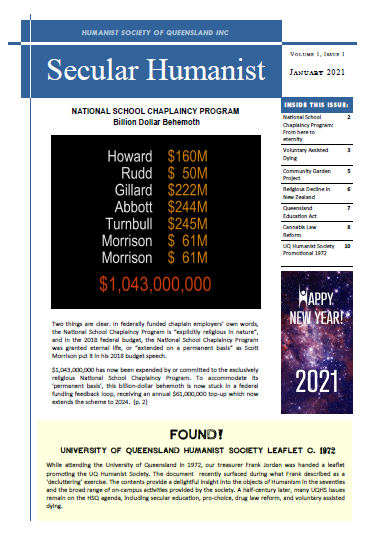